We stand with Ukraine during this heinous assault on their freedom, their independence and their lives. To support Ukraine in their time of need visit this page 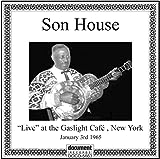 Son House - Yonder Comes My Mother When the Roll Is Called Up Yonder - 3:35

Why don't you come up here, pony, now come on, please let's us go
I said, "Come up, get up now, please pony, now let's us go"
Let's we saddle on down on the Gulf of, of Mexico

__________
Note 1: catch, probably, to rig up to a buggy;
Note 2: too black bad, vague blues superlative, along the order of "mean" or "too tight". Although the tendency to invert conventional meaning has been described as a characteristic of black phrase-mongering, this expression has precedent in passe phrases like "bad to beat", meaning hard to beat. "Black" belongs in House's phrase as an intensifier, or else is used for the sake of alliteration.