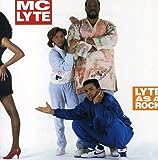 Lyte as a Rock

[Milk]
Do you understand the metaphoric phrase 'Lyte as a Rock?'
It's explaining, how heavy the young lady is
You know what I'm saying King?

[King of Chill]
Yes my brother, but I would consider 'Lyte as a Rock'
a simile because of the usage of the word 'as'
And now.. directly from the planet of Brooklyn
MC Lyte -- as a Rock!

[MC Lyte]
Must I say it again, I said it before
Move out the way when I'm comin through the door
Me, heavy? As Lyte as a Rock
Guys watch, even some of girls clock
Step back, it ain't that type of party
No reply if you ain't somebody
Get out my face, don't wanna hear no more
If you hate rejection, don't try to score
First base? You ain't got what it takes
You smile, you wink, you big fake flake
You're so pathetic you make my stomach turn
You beg, you borrow, now you have to learn

[MC Lyte]
Lyte as a Rock, or I should say a boulder
Rolling down your neck, pounding on your shoulders
Never shall I be an emcee, called a wannabe
I am the Lyte, L-Y-T-E
This is the way it is, don't ever forget
Hear the rhyme by someone else and you know they bit
All in the way, just little obstacles
Chew em up, spit em out, just like popsicles
Suckers out of my way, we're not on the same wavelength
I show stability, potential and strength
On the other hand, you are weak and unruly
Could never be a spy, cause you're just a plain stoolie

[MC Lyte]
I'm a slave, I'm a slave, I'm a slave to the rhythm
Def rhymes on the micraphone is what I'm givin
Yes I am a Rock and you are just a pebble
Milk turn up the base, and Rock adjust the levels
If a rap can paint a thousand words then I can paint a million
Wait, Lyte is capable of paintin a bazillion raps
So when I say it, this is what I mean
Audio Two an alliance on the scene
and I'd like to say whassup to my producer King of Chill
Party people are you ready, jam if you will
Never underestimate Lyte the Emcee; I am a rapper who is here
to make the things the way they're meant to be
The World Ultimate, I'm here to take the title
but I had a little trouble upon, my arrival
But I got rid of those who, tried to rock me
Lyte is here, no one can stop me

[MC Lyte]
There are Hip-Hop leaders, this you know
We also have, hip-hoppers that follow
By the tone of my voice, you can tell I am a scholar
I'm also the leader of the hip-hop followers
Now get this, I'm at a jam and I'm rockin it
Suckers like a checkerboard, when black is clockin it
The grace as I ease across the stage
Bars around the audience, sort of like a cage
They laugh, cause they assume I'm in prison
but in reality, they're locked in
Once again I'll state that I can't be stopped
cause yo, I am as Lyte, as, Rock!