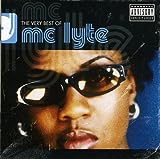 The Very Best of MC Lyte

He knows he's leaving, not much time left
Holding on to his very last breath
I saw him last week, nervous and uptight
Losing sleep, stays up all night
Wishin he woulda used his mind and not rushed
to push in the bush but took his time
to get to know the girl he slapped skins with
shared needles with
Wish he could go back, change the direction
But now he's got the infection
I spoke to him, gave him inspired words
I'm sure he's heard
live by the sword, die by the sword
What's left, pray to the oh Lord
You can deny but the truth will unfold
because the eyes are the soul

I look into his eyes, but he's so high
from the crack, he thinks that he can fly
He has problems he doesn't like solving
Takes one hit, and thinks the world stops revolving
19, his eyes full of tears
He hasn't smiled at least for a year
His mom is gone cause he was high one night
while they killed her, because of the crack pipe
He's wanted by the law
because he's robbed at least three grocery stores
He's lost, all control
Take a look, eyes are the soul

I look into her eyes, she's so young
but I know, where she's comin from
I've watched her grow, little girl down the street
White shirts and skirts with pleats
She cried, fear in her voice
Not knowing, she had a choice
Oh so sad, oh so lonely
If she knew that she's not the only
one in school that didn't use the caution
Facin, raisin a baby or abortion
Her mother said she had to leave
Who wants to be where a baby is not received
No ultimatum, she's goin to the G.Y.N.
to put it to an end
She's learned a lesson I suppose
I can tell, eyes are the soul