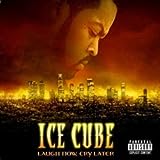 [Intro - various dialogue]
Now that's how this shit go!
And I know you don't like me spittin in your motherfuckin face
But ain't a motherfuckin thing, you can do, about a nigga
Punk motherfucker!

Some people may say well, you overdramatized it
No we're not - it's not a drama workshop, it is a reality
Things like that do take place in prisons
The murders, the suicides, as well as the rapes
Do take place inside these human warehouses

[Ice Cube]
Nigga I'm a hustler, act like I'm lovin ya
Don't mind fuckin ya, just like the Governor
Used to be the dope man, rolled a hundred spokes man
When I come through, treat me like the Pope man
Ghetto spokesman, I know niggaz
in Eastside Oakland all the way to Brook-lyn
And they love my shitty drawers, what you smokin?
Think you got the balls, nigga I'm a Trojan
Catchin all that just like a prophylac'
Don't reproduce, that bullshit is whack
Flavor Flav with a white bitch that is whack
Got to put the nigga back in my Cadillac
Take him to the hood, where it's action packed
Let him know that the target's still on his back
It's a hustle called capitalism
Got my niggaz in prison, all stuck in the system yeah
Recognize who's a hustler, George Dubya
He's the one that's sittin back, fuckin ya
With a big dick stuck in ya
I'm from a place where the fuckin Terminator is the Governor

(I got a Public Pretender.. tryin to make me a winner)
(Nigga please don't surrender.. they'll have you for dinner)

[Chorus: Ice Cube]
The ghetto is a nigga trap, take the cheese
Soon as you do it here come the police
Invented and designed fo' us to fail
Where you gon' end up, dead or in jail

[Ice Cube]
You only got two places
State of California, got two faces
Motherfuckin devils, get straight racist
When they get you in them lonely dark places
Concrete slave ships, never move
Where niggaz like us get used like a mule
Don't let 'em catch you, arrest you
Strip and undress you, throw you in a cesspool
You wanna know the crime of the century
A ghetto elementary, a mental penitentiary
Black man, you never been friend of me
Boy you kin to me, why we enemies?
The ghe-tto is a trap
Fuck where you from, nigga look where you at
Where you wanna be? Point it out on a map
Don't be scared to leave homey, we can come back
If you wanna come back to this bullshit
Most of it comin straight out the pulpit
We got to change our ways in the hood
Understand that it's AIDS in the hood...

(I got a Public Pretender.. tryin to make me a winner)
(Nigga please don't surrender.. they'll have you for dinner)
[fades out]