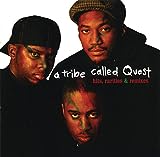 [Verse 1: Q-Tip]
Yeah yeah yeah
Mr. Incognito is back again
Now all I want is peace and papes, and a physical frame
Jottin down my list of positives in life
I want a ride, crib, mud, wife
The look on my girl is filled with conviction
Gonna get what I need, the league restriction
Babble on the Boulevard to brother hood buddies
Pokin in my pocket it's the E for the moneys
Jay and all the jokes that jet in the jetters
While I'm at the booth tube watchin ?beretta?
Swig up on a forty cause I'm feelin thirsty
Mama says she taught me, better say she cursed me
Throwin on my hoodie low-profilin, whassup with the Twister
Brother man be wildin
While I be on mission that's beyond eye level
Questin out the devil and this styles that I sever-
-al Quest with the Questers, a Quest on a solo
Boomin in a Benzo, Beamer or a Bronco
Boom pack a boom boom, boom pack a boom
If my sight isn't seen, silly saps will assume
That we fallin off the earth with the Nina and the pensa
The Five Foot Assasin with the shade of magenta

[Verse 2: Phife Dawg]
Magenta is the shade for the mystic parade
Physical Trini boy lyrically I enstrain
Livin of Lyndon 1-92nd
Chillin at the rest other brothers wreck it
Easy like I'm on it, Commodore Sunday
Waited for tuesday, fourmatic monday
When I woke wednesday persons was groundin
Don't know the whereabouts can't be foundin
Chillin for the villain the one they call the Phifer
Still on the smooth but a tidbit hyper
Get with the gat one as I hit the D-L
It's my thing what I ring I try to do it well
You can bet your bottom dollar that the Tribe will not be slippin
Makin hit after hit as we commence to start rippin
People think I'm buggin or I have the heebiejeebies
The reason they can't find me is because they can't see me

[Verse 3: Q-Tip]
It's like the war's goin on in the middle of your mind
But your mind can't contain Incognito's on the brain
So you chill by yourself don't really sweat nobody
Speak to all the brothers and say peace to every hottie
But lurkin in the ghetto is a germ that insist
Shoot you back the german away or utilise your fists
Neither of the two, just continue with your thoughts
And rush away your pain with the power of the thought
Ain't got no time for girls, cause girls be on some bull
Checkin for a nigga who got crazy pull
On some deep rooted sexual, highly intellectual
Not checkin for the fame although it's propetual
I enter the world the same way I'll exit
If you really think the groove, than hey glad you checked it
Cause Incognito's strong not urkin like a blister
Before you speak about me, make sure you call me Mister